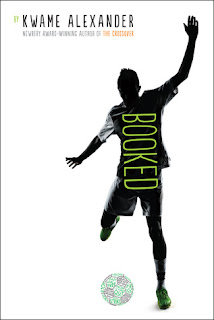 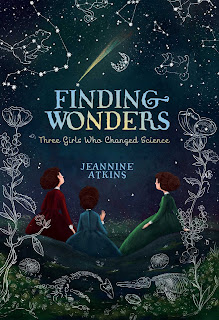 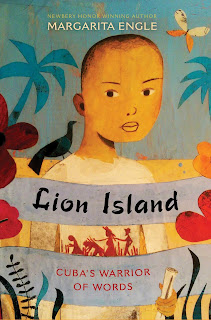 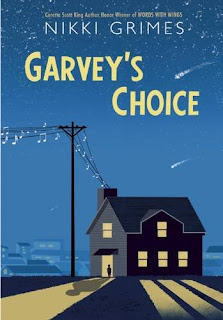 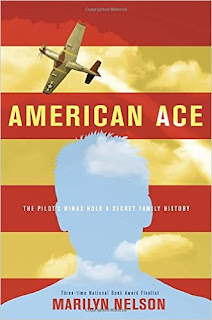 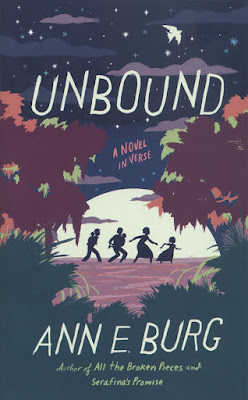 The Plot: Ann E. Burg's 2016 Unbound: A Novel in Verse follows nine-year-old Grace, a light-skinned enslaved girl, as she moves from her mother's cabin to the "Big House" where she will work in the kitchen. Within the first pages of the narrative, Grace's mother appeals to her: "Promise you'll keep / your eyes down," "Promise you'll keep / your mouth closed," and "Promise you won't / talk back" (4). Similarly, Grace's Aunt Sara echoes her mother's warning: "Grace, stay out of trouble" (23). Aunt Tempie takes Grace under her wing, and begins to teach her how to cook, clean, and work in the kitchen. Almost immediately upon entering the Big House, Grace begins to break her promises to her family by questioning and speaking out against the various injustices that occur at the hands of the Missus. Grace meets other house slaves, including Jordon (a server who Aunt Tempie refers to as "a runner" who never smiles and has a wife and daughter that he will never see again) and Anna (a young girl who is the Missus's personal slave and who receives some of the worst treatment). Because Grace has such a hard time following her mother and Aunt Sara's warnings, the Missus begins to punish her. One night Grace overhears the Missus and Master Allen planning to sell her mother and two younger brothers at auction to teach her a lesson. Grace decides to take action and implores her family to flee. The rest of the narrative tells the story of Grace's family and their escape to the Great Dismal Swamp.

The Poetry: Burg's novel in verse is told primarily in short lines of lyric, free verse. Throughout the verse novel, Burg makes use of a dialect that drops Gs and uses "what" in place of "that," and while she does note in the end pages of her novel that she used research from "narratives of the formerly enslaved... prepared by the Federal Writers' Project" (348) and consulted the work of anthropologist Dr. Daniel O. Sayers and historian of the African diaspora Dr. Sylviane A. Diouf to assist her in writing her novel, I was hoping for a bit more discussion in her Author's Note and Acknowledgement sections relating to her use of dialect and her linguistic choices. In terms of poetic devices, Burg makes use of some lovely imagery, simile, and lyricism throughout her narrative. For instance, in the first section of the verse novel, Grace feels her resolve begin to crumble:

in a sweet blue sky,

a fistful of thorns

and in the lines that end the second section of the narrative as Grace's family moves closer to freedom:

on a dark lake

what's set before us 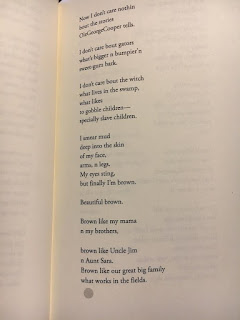 Although these lines evoke some engaging images, they do not make up for the overall sense that something in this project is missing in terms of language and poetic technique. I am wary of the use of dialect in this verse novel, particularly by a white writer, without citation of any source material or discussion of these linguistic choices in her end pages.

The Page: Unlike most other verse novels for young readers, Burg does not separate her narrative into individual poems. Instead the verse novel is divided into three parts: part one is around 170 pages, part two around 100 pages, and part three around 75 pages. Each poem is untitled, but is a few pages long and its ending is denoted with a grey dot. As previously noted, Unbound does include an Author's Note and an Acknowledgements section, but Burg could have included much more information about her research, her sources, and her use of dialect throughout her narrative. I give Unbound three stars.
Posted by Krystal Howard at Thursday, December 29, 2016 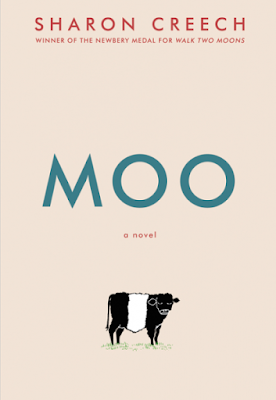 The Plot: Sharon Creech's (2016) verse novel Moo: A Novel tells the story of twelve-year-old Reena. Reena moves with her younger brother, Luke, and her parents from the big city to Maine, where they encounter an old woman named Mrs. Falala. Mrs. Falala owns a farm and a stubborn cow named Zora. After a few strange meetings with Mrs. Falala, Reena and Luke's parents volunteer them to work on the farm helping Mrs. Falala clean and care for Zora the cow and her other farm animals. While Reena and Luke are at first skeptical and even scared of the old woman and her cow, they eventually grow quite fond of her. Luke, an avid drawer, spends time teaching Mrs. Falala to draw, while Reena works diligently to train Zora. With the help of a young man named Zep, Reena begins to train to show Zora at the county fair. The novel ends with Reena and Zora's first time showing at the fair, and an unexpected twist involving Mrs. Falala.

The Poetry: Creech's verse novel follows her previous work in this form, Love That Dog (2001), Hate That Cat (2008), and Heartbeat (2004), in that it uses free verse  throughout the narrative, in addition to concrete poetry and varied typography in several poems. Despite the fact that in Moo the emphasis is most often placed upon the narrative arc, instead of poetic devices and techniques, Creech does use the broken line, white space, and typographical variances in order to emphasize the significance of particular moments in the narrative and to encourage the reader to spend more time on the page. For example, in the poem "Back to Twitch Street," Creech uses imagery and typography to create a distinct picture in the reader's mind of life on the farm:


with the open attic window 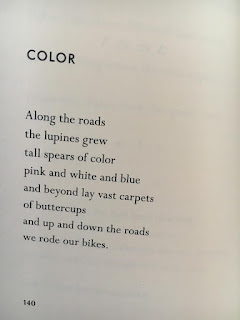 In this excerpt from "Back to Twitch Street," Reena and Luke return to the farm after riding their bikes through pastures and past views of the ocean. They are truly captivated by the scenes of the country after growing up in the city. Throughout the narrative, Reena and Luke are captivated the the flute music they hear Mrs. Falala playing from her attic window. They never seen her play, but they come to learn that her flute music and attic space help her practice "remembering."

The Page: The 74 poems that make up Creech's verse novel Moo trace the experiences of pre-teen Reena as she moves from the city to the country and transforms from an indoor girl to an outdoor girl. Creech's Moo was a fine verse novel that represents a growing trend in the blend of free verse, prose sections, and concrete poetry in the verse novel for middle grade readers. I give Moo three stars.
Posted by Krystal Howard at Monday, December 19, 2016 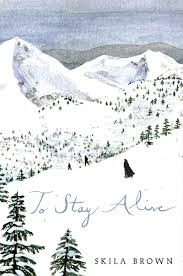 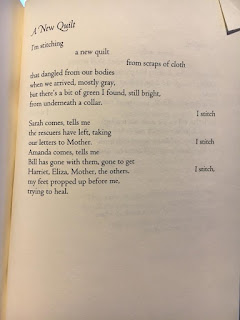