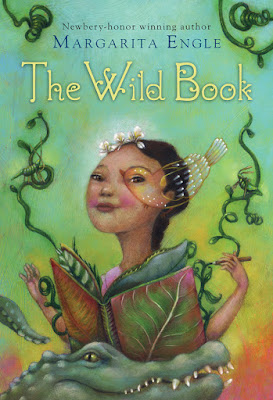 The Plot: The Wild Book (2012) by Margarita Engle is verse novel inspired by the stories and experiences Engle's maternal grandmother told her about her childhood growing up in Cuba in the early 1900s. As she explains in her author's note, the verse novel follows Fefa (Josefa de la Caridad Uria Pena) who lives on a small farm in the countryside during a time of "chaos following Cuba's war for independence from Spain and the subsequent US occupation of the island. It was a time of lawlessness, when bandits terrorized the countryside, kidnapping children unless their families agreed to deliver ransom money" (123). From the first poem in the collection, readers learn that Fefa has "word-blindness" (3)-- "a medical term used in the early twentieth century for what we now call dyslexia" (125). The narrative focuses on Fefa's struggle with dyslexia and learning to read and write through poetic exploration, as well as Fefa's encounter with Fausto, her family's old farm manager, who writes a sloppy "ugly" poem in her honor (42); Fefa is mortified by Fausto's attention.

The Poetry: Like many other of Engle's verse novels, The Wild Book employs free verse, lyricism, and imagery to tell the story of a young girl's experiences. The Wild Book in many ways shows a young girl developing a love for reading poetry and writing in her own wild book, which her mother gives to her upon her diagnosis with word-blindness: "Think of this little book / as a garden, / Mama suggests" (5-6). Her mother advises her to view her writing as a path to maturation and self-acceptance:

all over each page, she advises.

then relax and watch

as your wild diary

And eventually, a love of language emerges within Fefa. She exclaims later in the collection in a poem entitled "Fly to the Truth of Dreams" that she "love[s] the way poetry / turns ordinary words / into winged things" (68). In addition to the imagery and lyricism Engle relies upon, she also utilizes repetition and the space on the page to emphasize the ways in which Fefa's struggle with dyslexia manifests itself, as well as how she begins to find ways to allow herself to experience more comfort and pleasure in language. 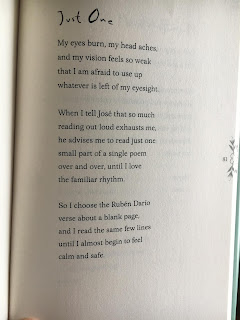 The Page: Engle's verse novel begins with a dedication "for young readers who dread reading and for those who love blank books" which answers one of the chargers that the verse novel form is ideal for reluctant readers. This dedication is followed by a quote in Spanish with a translation from the poet Ruben Dario, who is referred to throughout the narrative as the Fefa's mother's favorite poet. The quote reads: "In the hour of daydreams my eyes watched / the blank page // And there came a parade of dreams and shadows" (from "La Pagina Blanca" or "The Blank Page"). This epigraph complicates Engle's dedication in that it demonstrates the complexity and intertextual, cross-cultural references made throughout the collection. The book ends with an author's note that includes a family photograph of Fefa from 1914 and an acknowledgements section.

I thoroughly enjoyed The Wild Book; I give it four stars and highly recommend it.
Posted by Krystal Howard at Friday, May 26, 2017 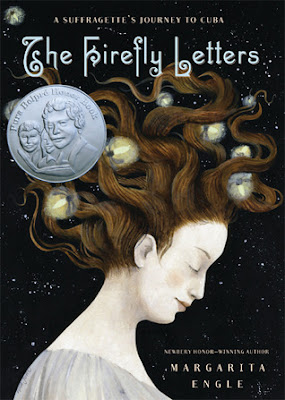 On May 11, 2017 Margarita Engle was named the Young People's Poet Laureate by the Poetry Foundation. Engle follows Jacqueline Woodson, who was the previous honoree in 2015. As I've noted in previous reviews of Engle's work on this blog, Engle is a prolific verse novelist; she has published eleven verse novels to date (four of which I have reviewed here)-- one every year since 2008. Over the next year, as part of this blog's focus on the geneology of the verse novel, I will review the remaining six verse novels written by Engle, which date back to 2006.

The Plot: Engle's 2010 verse novel The Firefly Letters: A Suffragette's Journey to Cuba is the second book in her "loosely linked group of historical verse novels about the struggle against forced labor in nineteenth-century Cuba" (Lion Island, 160). Winner of a Pura Belpré Honor for narrative, The Firefly Letters is a polyvocal verse novel that tells the story of real-life historical figure Fredrika Bremer (1801-65) who traveled to Cuba in 1951 for three months and interacted with a fifteen-year-old African-born enslaved translator named Celia. Engle's narrative follows these two women and her invented twelve-year-old character Elena. Bremer, as Engle explains in her historical note, was Sweden's first female novelist and one of the world's earliest advocates of equal rights for women (146). The Firefly Letters combines the voices of Fredrika, Celia, and Elena to explore the struggles facing women from different backgrounds, of different ages, and of different races toward equality.

The Poetry: While I found Engle's verse novel rich in terms of narrative, The Firefly Letters lacked some of the more arresting lyricism and imagery evident in many of Engle's more recent verse novels. The elements of poetic form that The Firefly Letters employs include the use of free verse and the space on the page, the blending of voices (each poem is titled by the character speaking's name), and the occasional bit of imagery or use of metaphor. One such passage appears in the poem told from Elena's point of view where she describes the folds in cloth as stirring "in the sea breeze, / moving with a sigh / like wings" (139). In this poem, Elena is meditating upon a secret plan she has to help better Celia's life that involves her smuggling expensive fabrics from her house. The "e" sounds in the first quoted line enact the "sigh" mentioned in the second line, while the final line that describes the movement of cloth as that of wings alludes to a possible freedom or movement toward hope. 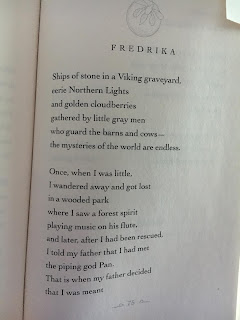 The Page: Within the 144 pages of the verse novel, poems alternate between the three characters' points of view. The narrative is book-ended with a quote from a letter from Bremer to the Queen of Denmark describing her visit to Cuba and a historical note, an author's note, acknowledgements, and references. Engle cites Bremer's New Sketches of Every-Day Life (1850) as comprising the "most complete known record of rural daily life on the island [of Cuba] at that time" (146).

I give Engle's The Firefly Letters four stars. Look forward to my reviews of Engle's verse novels from published between 2006 and 2012, as well as her newest 2017 verse novel in the coming months.
Posted by Krystal Howard at Monday, May 22, 2017