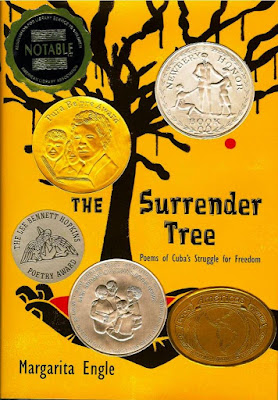 The Surrender Tree: Poems of Cuba's Struggle for Freedom (2008) was the first verse novel by Margarita Engle that I encountered years ago. It is the first book in Engle's "loosely linked group of historical verse novels about the struggle against forced labor in nineteenth-century Cuba" (Lion Island, 160). The Surrender Tree was a 2009 Newbery Honor Book, only the third verse novel to be recognized by the Newbery committee after Marilyn Nelson's Carver: A Life in Poems (2002) and Karen Hesse's Out of the Dust (1998). Engle was the first Latinx author to receive a Newbery honor.

The Plot: In Engle's The Surrender Tree, poems alternate among the voices of five primary characters to tell a story based upon historical events as well as Engle's own great-grandparents' experiences during Cuba's fight for independence. It take place between 1850 and 1899, during which time three different wars rage in Cuba. The narrative follows Rosa, a healer and nurse; Lieutenant Death, a slavehunter; Jose, Rosa's husband; Weyler, a captain-general of Spain who instituted concentration camps in Cuba to control the rural civilian population; and Silvia, an eleven year old girl from a small farm who comes to learn from Rosa after her family starves in the concentration camps.

The Poetry: The most striking poems in this collection are told in the voices of Rosa and Silvia and meditate upon the natural world as a healing balm for war and sorrow. For instance, in an early poem, Rosa describes the burning city of Bayamo:

I watch the flames, feel the heat,

inhale the scent of torched sugar

I listen to voices,

Imagery, language, and metaphor are at work in this poem to evoke the sense of beauty and danger brought on by the violence of war. The internal and slant rhymes in the first three lines ("watch," "torched," "scorched") emphasize the crackling sound of the flames, while the image of "voices, / burning a song" links the lives of the people to the fire that engulfs the city. Later in the verse novel, the poems told from Silvia's view point evoke the same lyricism and imagery. In one poem, the speaker describes how the driver of an oxcart helps her steal away from the concentration camp: "He points to a hole int he fence, / puts his finger to his lips, / then draws a map in the sky--" (103). Again, the sky figures heavily into the narrative, and silence lingers at the end of each line of poetry. 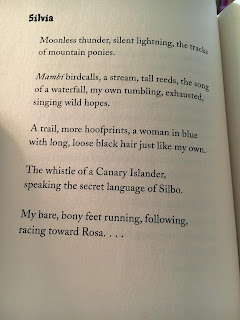 The Page: Engle's verse novel is divided into five parts: "The Names of Flowers, 1850-51," "The Ten Years' War, 1868-78," "The Little War, 1878-80," "The War of Independence, 1895-98," and "The Surrender Tree, 1898-99." The novel begins with a dedication and explanation of the historical roots for the narrative, as well as a quote from a poem by Jose Marti. It concludes with an author's note, a historical note, a chronology, selected references, and acknowledgements.

I give The Surrender Tree four stars.
Posted by Krystal Howard at Friday, June 09, 2017 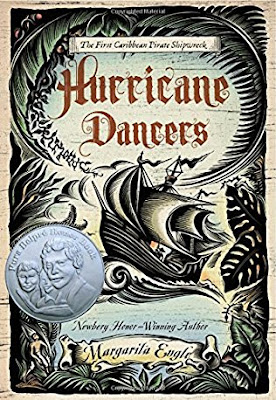 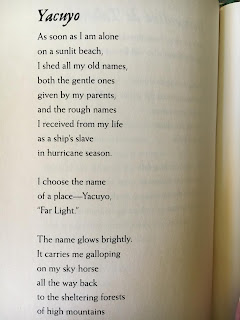