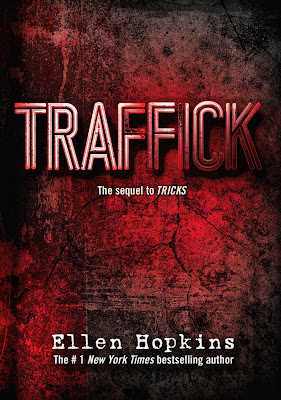 The Plot: Traffick (2015) is the sequel to Ellen Hopkins's Tricks, and in it Hopkins presents the intertwining narratives of five teenagers from across the country who are living in Vegas and have been victimized by sex trafficking. As a sequel narrative, Traffick focuses on each characters' attempt to become a survivor of trafficking and their individual, rocky roads to recovery. The first character introduced is Cody, who wakes up in the hospital after being show to find that he is paralyzed from the waist down. Cody's struggles with gambling led him to sex work. Next, the story shifts to Ginger, who runs away from home with her girlfriend Alex after years of her mother selling her to men for drugs, but is eventually arrested for soliciting an undercover cop. Ginger is living in House of Hope, a Christian center for young sex workers looking to become survivors. Ginger practices writing her story through poetry while at House of Hope. Next, the narrative moves to Seth, a farm boy from Indiana whose father kicked him out after he came out to him. After a string of boyfriends, Seth finds the only way to survive is to begin working for an escort service. He also volunteers part-time at the YouCenter serving LGBTQ youth. After Seth, readers are introduced to Whitney, a girl from a wealthy family whose boyfriend/pimp Bryn facilitated her trafficking and heroin addiction. After the police find her, she is placed by her family in a five-star rehab facility called Clean Slate. Finally, the narrative turns to Eden, a preacher's daughter who after escaping from an abusive, religious facility called Tears of Zion, turns to prostitution to survive. After wandering into a Catholic church, Eden is directed to Walk Straight, a rescue for teen prostitutes intent on a better life. The narratives alternate every 10 pages or so for 500 pages.

The Poetry: Hopkin's Traffick is told through a series of alternating narratives. Each time a new character is introduced, a poem "written by" that character or someone close to them leads off the section. The poems are told in free verse and are typically one to three pages in length. Often, Hopkins will include a poem that manipulates the space on the page in order to isolate a specific phrase that can be read inside the poem, but also vertically as its own entity. For example, the first page of the verse novel is a poem written by Cody Bennett; it contains four stanzas with four lines justified left and four single lines appearing after each stanza justified right. The lines justified right form the phrase: "the abyss,... / would be... / preferable to... / this living hell" (1). Each right justified line can also be read as part of the larger poem, as in the first five lines:


The courage to leap 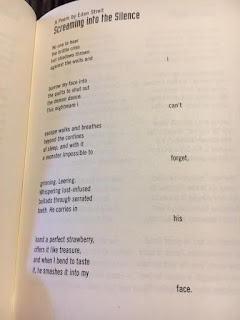 The Page: In addition to the manipulation of space on the page, Hopkins also makes use of varied font to depict when characters write poetry or letters. Hopkins includes a detailed author's note in which she explains the research she did for Tricks and Traffick, relates the significance of the project to her, and provides a list of resources for young people. Overall though, I found Hopkins's writing in Traffick to be lacking. One of the biggest issues with the narrative is that it tried to develop the stories of too many characters, which became confusing as a reader and almost trivialized the horrific experiences of child sex trafficking being related. In addition to the five primary characters, readers are also introduced to a myriad of other characters who also share their unique stories of victimization. Ultimately, Hopkins verse novels are more successful when they focus on fewer characters. The inclusion of poems "written by" characters in addition to their narratives was interesting, but got lost in the chaos of narrative. I give Hopkins's Traffick two stars.
Posted by Krystal Howard at Friday, October 28, 2016 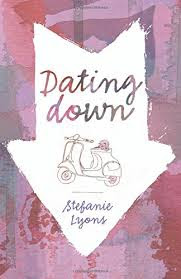 The Plot: Stefanie Lyon's 2015 verse novel Dating Down tells the story of high school junior and daughter of a politician Samantha Henderson and her experience of falling in love with a "bad boy," who is referred to throughout the narrative as "X." Readers learn in the first pages of the narrative why Sam's love interest is referred to in this way:

for the reasons I crossed him out of my life.

for the number of times I plunged into self-destruction. 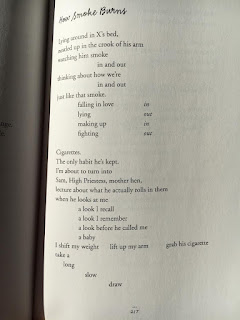 The narrative follows Sam through the first time she sees X at a coffee shop where he works, through her first sexual experience with him, her discovery of his drug use and infidelity, her own participation in drug and alcohol abuse, and finally her decision to separate from X and move on with her life. Dating Down follows in the pattern of many verse novels for young readers in that it is part of the problem novel tradition.

The Poetry: Lyon's narrative primarily utilizes free verse poetry throughout while making use of end rhyme and concrete poetry occasionally. Lyon also employs the format of dramatic verse in order to demonstrate conversations between Sam and other young characters in the narrative. Ultimately much of the poetry lacked lyricism or innovation. For example, in the poem "Sex," which details Sam's first time having sex with X, the poem relies on short, choppy lines and sporadic end rhyme to move the reader more quickly through the moment: "my bra / my shirt / the late-May air" and "His hands / my body / the canvas of me" (121). Ultimately, this approach is not effective in drawing the reader into the narrative or allowing the reader to linger in the emotion or intensity of Sam's experience.

The Page: Throughout the narrative, Lyon often makes use of the space across the entire page, presumably in order to allow the reader to linger in the white space or to slow down the eye in the reading process. But overall, this approach was not successful. The poetry in Dating Down fell flat and the narrative didn't succeed in pulling me in as a reader. In an over-300-page narrative, the lack of a compelling narrative made getting through Dating Down particularly difficult. I give Lyon's Dating Down two stars.
Posted by Krystal Howard at Friday, October 21, 2016