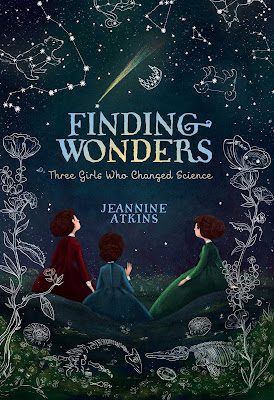 The Plot: Jeannine Atkins's Finding Wonders: Three Girls Who Changed Science (2016) is a three-part novel in free verse that explores the lives of three real women: Maria Sibylla Merian, Mary Anning, and Maria Mitchell. Each narrative is roughly 60 pages in length, and explores the life of these young women from pre-teens through middle-age. Maria Merian's story begins when she is 13-years-old living in Frankfurt, Germany in 1660. Maria is the daughter of an artist, and she practices painting, but she is extremely fascinated by caterpillars and their metapmorphosis. Maria travels the country, painting these animals and learning about different types of caterpillars. Mary Anning's story begins when she is 11-years-old living in Lyme Regis, England in 1809. She works together with her father and then her older brother excavating stones on the seashore; unlike her father and brother, who simple chisel the fossils from the earth to sell, Mary is mesmerized by the patterns in the stones and the creatures from the past they discover. Maria Mitchell's story begins when she is 12-years-old living in Nantucket, Massachusetts in 1831. Maria's father is a mapmaker, who teaches her how to make star charts, use telescopes, and repair chronometers for sailors. Maria's family gives her a room of her own to do her work, and she eventually becomes the first female astronomy professor at one of the first colleges open to women, Vassar. Each of these narratives pushes forward into the next, demonstrating the ways in which women in science have advanced despite some of the restraints placed on them by their families, religious beliefs, and communities.

The Poetry: Finding Wonders utilizes lyrical free verse throughout, and the poems are rich with image, sound, and metaphor. For example, the poem "Metapmorphosis" in the first section of the book begins, "In a quiet revolution, Maria paints / on one piece of paper / first how a small egg breaks" (39), continues, "At last the cocoon breaks. / Pushing past sticky strands, / a fragile self unfurls," and finishes "Soft, moist, a moth fumbles / then unfolds four wings that flutter, / making her own faint applause" (40). In this poem, Atkins employs alliteration and the rhythm of soft vowel and consonant sounds. She also uses the caterpillars metamorphsis as a metaphor for Maria's own narrative of development as a young woman of science, pushing back against the suspicion her religious family has toward studying the natural world. Likewise, Mary's story uses metaphors of scientific and self discovery. In the poem "A Face in the Cliffs," Mary and her brother discover a huge fossil of a strange animal in the side of a cliff after their father and younger sibling's funerals. "After the rain, Mary walks by the sea, / which seems wide and empty. Pebbles clatter. / A gull drags its broken wing" (95); in these lines, Mary's feelings of loss and hopelessness are made manifest in the landscape by the speaker of the poem. Once they discover the creature, Mary's desire for knowledge is reignited: "She squeezes her hand, tastes salt on her tongue. / She'll scrape away stone. / Wonder doesn't have walls" (97). 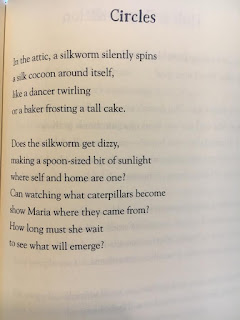 The Page: Atkins's verse novel is divided into three distinct parts, "Mud, Moths, and Mystery," "Secrets in Stones," and "Many Stars, One Comet," and each section begins with an illustration of the young women its narrative charts and a prose paragraph titled "The ____'s Daughter" that locates the narrative in history and place. Interestingly, while each section begins by defining the young women by their father's professions, each of the narrative then turns this idea on its head by demonstrating the ways in which each young woman uses and moves forward from the knowledge she gains from her father. For example, in the last section, Maria's father is depicted as boasting about her accomplishment of locating a new comet, and the speaker notes "He enjoys introducing himself as Miss Mitchell's father" (178). The verse novel contains an author's note, a "reading past these pages" section, and a bibliography of sources.

Atkins's Finding Wonders is a beautifully written verse novel and the narrative is compelling. Atkins's purpose behind her narrative is to encourage young women's interest in the STEM fields and to bring recognition to female historical figures who helped to pave the way. Atkins's essay "Scrap by Scrap: Turning History into Poems" in which she explains her process would be a great pairing for this verse novel. I give her verse novel five stars, and I highly recommend it.
Posted by Krystal Howard at Friday, November 18, 2016 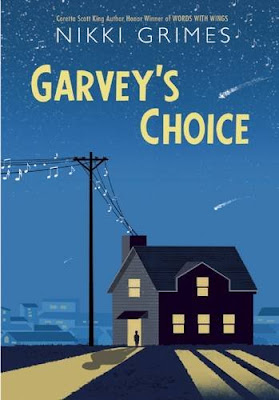 The Plot: Nikki Grimes's 2016 verse novel Garvey's Choice is a slim collection of poems, each of which uses the tanka form, to tell the story of a middle school boy named Garvey. Garvey desperately wants his father to see him. He is constantly teased because he is overweight, and his father laments the fact that he is more interested in books and music than in sports. He eats to fill the gap of loneliness, sadness, and longing to be seen as valuable just as he is by his father, his family, and his friends. Throughout the book, Garvey comes into contact with friends who encourage him and help him cope, including Manny, a boy who is passionate about cooking although his father thinks "that cooking is for girls" (62). Manny also has albinism and is picked on just like Garvey. Half-way through the collection, Garvey joins the chorus and finds his voice and a way to connect with his father through singing.

The Poetry: Grimes's verse novel is told entirely in the tank form. Tanka, as she explains in a section at the close of the book, is "an ancient poetry form, originally from Japan" (107). The tanka is five lines long, with each line adhering to a syllable count of 5-7-5-7-7. Grimes goes on to say that "traditional tanka poems focus on mood" and are "often poems about love, the four seasons, the shortness of life, and nature" (107). In addition to the use of the tanka form, Grimes also employs imagery, metaphor, and lyricism throughout her collection, and each of these poetic devices provides for greater emotional resonance for her narrative. For example, the poem "Phone Call" begins:


All evening long, I

try tucking in my sadness,

but it keeps getting 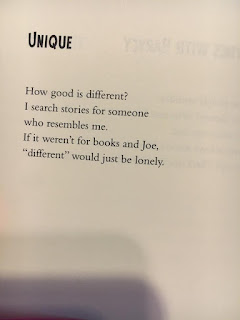 In the poem, Garvey explains to his friend Joe about his desire to be seen by his father and to connect with him, but Joe response dismissively by saying, "I get it. Seriously. / But you've got a dad. / Mine skipped out long time ago" (19). In other poems, such as "Unique" Grimes uses Garvey's sadness and feelings of loneliness to bring up issues of the lack of diversity in literature for young people: "I search stories for someone / who resembles me" and "If it weren't for books and Joe, / "different" would just be lonely" (10).

The Page: Garvey's Choice is a short, but extremely impactful verse novel that utilizes poetic form and devices to tell a much needed story that addresses body image, cultural constructions of masculinity, bullying, and the black experience. I highly recommend Grimes's Garvey's Choice, and I give it five stars. If you are interested in the "story behind the story," you can read more about that from Grimes HERE.
Posted by Krystal Howard at Friday, November 11, 2016 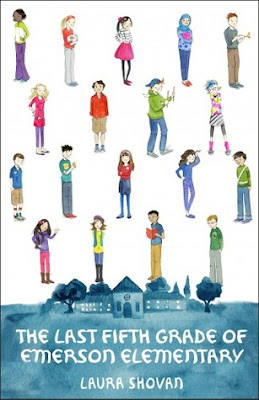 The Plot: Laura Shovan's 2016 debut The Last Fifth Grade of Emerson Elementary is a polyvocal verse novel that includes the voices of the eighteen students in Ms. Hill's fifth grade class during a transformative school year. At the end of the year, the crumbling school will be closed and bulldozed to make way for a shopping center. The verse novel explores this event through the eyes of each individual student. Ms Hill tasks the students in her class with keeping a poetry journal; their poems will go into a time capsule at the end of the year.

The Poetry: Each poem in the collection includes the date, the name and illustrated head shot of the student writing the poem,  and a title. The eighteen diverse characters within the verse novel who write poems include: Sydney, Rennie, Tyler, Norah, Rachel, Sloane, Mark, Ben, Katie, Gaby, Brianna, Edgar, Newt, George, Jason, Hannah, Shoshanna, and Rajesh. Their concerns run the gamut from having a mother deployed in the armed forces, to having a crush on a classmate, to a death in the family. The poetry within The Last Fifth Grade of Emerson Elementary strives to represent many forms and a multitude of content, but ultimately much of it is uninteresting and the eighteen viewpoints make it difficult for the author to flesh out characters. One interesting move the author makes involves her inclusion of Spanish poems writeen by Gaby and their translation by another student in the class, Mark, on the facing page. This use of translation in Shovan's verse novel is lost though in the multitude of perspectives and thematic concerns. 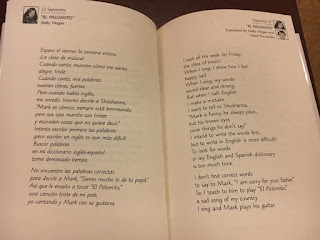 The Page: The Last Fifth Grade of Emerson Elementary is divided into four sections, each named for a different quarter of the school year. The poems within the collection allow for one poem per day during the school year. Shovan includes a lengthly section at the end of her verse novel that includes "A Closer Look at the Poems in This Book," which explains how the persona poems work throughout the collection; "Favorite Forms From Room 5-H," which includes a list and definitions of each of the forms used in the verse novel from acrostics, concrete poems, and haiku to free verse poems, found poems, and odes; "Form the Fifth-Grade Poetry Prompt Jar," that lists several ideas for beginning writing poetry; and a glossary. Much of the work of this verse novel is pedagogical, and I can see Shovan and/or her publishers envisioning this work being used in the classroom. Ultimately, though, this work falls short in both poetry and plot. I give Shovan's The Last Fifth Grade of Emerson Elementary two stars.
Posted by Krystal Howard at Friday, November 04, 2016