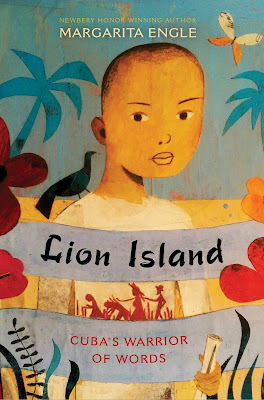 The Plot: Margarita Engle's newest verse novel, Lion Island: Cuba's Warrior of Words (2016), is the fifth and final volume in what she calls her "loosely linked group of historical verse novels about the struggle against forced labor in nineteenth-century Cuba" (160). And it is a lovely and powerful work that follows three young, culturally diverse protagonists: twelve year old Antonio, a messenger boy with Asian, African, and European ancestry who eventually becomes a translator  (based upon the historical figure Antonio Chuffat-- a champion of civil rights for the Chinese Cuban community); Wing, a fourteen year old Chinese American boy whose family barely escaped the anti-Asian riots in San Francisco; and his twin sister, Fan, a talented singer and performer. Antonio, Wing, and Fan's stories intertwine to tell the tale of how a group of young friends worked hard to tell their stories and have their voices heard in a time of violence, with injustice, war, and rebellions swirling around them. Antonio works to record, translate, and help give voice to the experiences of those enslaved Africans and near-enslaved Chinese indentured servants who were forced or coerced to sign eight-year contracts to work in the fields of Cuba, while Wing's story leads him to eventually join the rebellion and Fan runs away from home to work at el teatro chino as a singer who assists runaways in hiding on their way to escaping enslavement.

The Poetry: As previously noted, Engle is a prolific verse novelist for young readers, having published nine well-received, award winning verse novels before Lion Island. This volume contains beautiful poetry, and I found the poems which Fan is the speaker of to be particularly moving as she longs to become an artist. Engle's use of imagery, lyricism, and metaphor contribute richly to her work. The poem "That Same Evening" in which the speaker Wing describes being robbed by Spanish soldiers ends with two rhythmic stanzas describing his emotions: "Rage comes and goes in gusts, / like a hurricane's furious / wind" and "Quietly, I return to work the next day, / trapped in the eye of my own / storm" (41). The quiet rhythm and movement on the page of these two stanzas enacts the content of the poem, tracing the rise and fall of the wind as well as Wing's anger. Later in the narrative, in the poem "Mirror," Fan meditates upon her experiences of being a young woman and the twin sister of a passionate brother:


Being the twin of a boy

in and out of a shiny river,

the constant burst of rushing water

never peaceful enough to see my own

Toward the end of this same poem, Fan notes that her brother can go anywhere and so or say whatever he pleases, while as a young woman she must constantly guard herself and speak and dream with caution. While Fan and Wing's stories are significant to the narrative, Antonio's experiences are the underlying drive of the work. In the poem "Quiet Truths" toward the end of the verse novel, Antonio examines his place as messenger, translator, and activist,

How difficult it is to describe injustice.

No wonder Fan used a knife on wood,

or a stick in mud, before discovering

There's nothing a warrior of words can do

for people who have already been murdered,

nothing but offer comfort so that the living

can begin to feel peaceful in the presence

This seems to be the overall drive of Engle's series of historical verse novels that examine the struggles and injustices faced by so many during this time period in Cuba. Engle's Lion Island and her series as a whole draw attention to these experiences and histories. 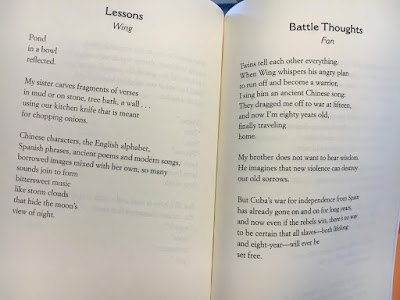 I give Engle's Lion Island: Cuba's Warrior of Words four stars and highly recommend it.
Posted by Krystal Howard at Friday, September 16, 2016