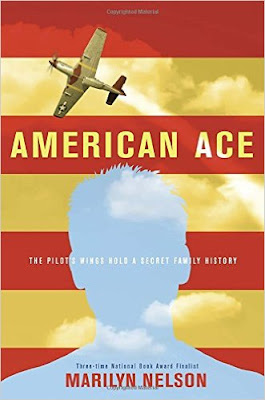 The Plot: Marilyn Nelson's 2016 verse novel (or as she terms it, lyric history) American Ace follows 16-year-old Connor as he discovers his geneaology and his family's connection to American history. When his Italian grandmother, Nonna Lucia dies, she leaves Connor's father a letter explaining that the man who raised him is not his father. Connor's father becomes depressed upon learning this news, and it isn't until he begins to teach Connor to drive that the "glacier... growing between" them begins to melt (15). During their driving practice sessions, Connor's father divulges the contents of Nonna Lucia's letter, they begin to have a discussion about identity and belonging (19). Connor's father tells his extended family the news shortly after and all of them are interested in the romance of being a "love child" (27). In addition to the letter, Nonna Lucia also left a gold class ring that belonged to Connor's biological grandfather. Connor and his father use these two artifacts to begin discovering their family history. After doing lots of research with a local librarian and having Connor's father's DNA tested, Connor and his father discover that Nonna Lucia's lover went to Wilberforce University, which was the first HBCU (historically black colleges and universities) in the United States, and was a Tuskegee Airman, a group of famous all-black fighter pilots in WWII. Shortly after discovering all of this, Connor's father has a stroke, and while he is working through rehab and recovery, Connor continues researching the Tuskegee Airman and writes about them for his senior US History Honors Thesis.

The Poetry: Nelson is well known for her poetry for both young readers and adult readers. This work follows her recent publication of How I Discovered Poetry (which I reviewed earlier this year) and is her ninth verse novel/lyric history. Like How I Discovered Poetry, which is a series of 50 sonnets, in American Ace, Nelson utilizes a consistent stanza form and meter throughout with each of her 45 poems consisting of two 12-line stanzas in loose blank verse (unrhymed iambic pentameter). In addition to these formal constructions, Nelson also uses lyricism (as her categorization of her work as a lyric history implies) throughout to focus her attention on the emotions experienced by a teenage boy learning about his family history and dealing with his father's illness. For example, in the poem "Beginning," which is the second poem in part nine, Connor meditates on how he coped while his father was recovering from his stroke:


The hours I'd spent watching Dad mend his brain:

they were the only ones that held meaning.

Those, and the hours I'd spent discovering

the Tuskegee Airman, that brotherhood 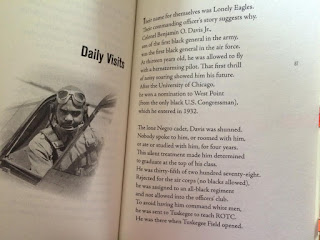 The Page: American Ace is divided into nine parts, and each part contains five poems. Nelson also includes several photographic images depicting the Tuskegee Airman (86, 90-91, 100, 119) and an author's note entitled "How This Book Came to Be, and Why an Older African American Woman Ended Up Writing as a Young White Man" (120). Nelson also uses another interesting formal approach in parts seven and eight. While the poems in these two sections make up Connor's honor thesis entitled "Discovering the Tuskegee Airmen," each of the poem titles alludes to the stages of Connor's father's recovery ("Acute Care," "Rehab," "Daily Visits," etc.).

I thoroughly enjoyed Nelson's newest verse novel and its approach to lyric history as a poetic form. I give American Ace four stars.
Posted by Krystal Howard at Friday, May 13, 2016