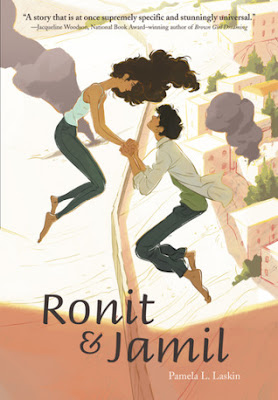 The Plot: Pamela L. Laskin's Ronit and Jamil (2017) is a contemporary retelling of Shakespeare's Romeo and Juliet set in the Middle East. The protagonists, Ronit (an Israeli girl) and Jamil (a Palestinian boy), are teenagers living in the present-day on either side of the barrier fence that divides Israel and Gaza. Ronit and Jamil first meet when they go to work with their fathers. Ronit's father is a pharmacist and Jamil's father is a doctor; the two men know and respect each other. Once Jamil and Ronit fall desperately in love, though, their families do not support them and become hostile toward each other. The verse novel is told primarily from the alternating viewpoints of the titular characters, but also includes the voices of their fathers in act IV. As Laskin notes in her afterword, the voices of the two teenagers sound very similar and that was a conscious decision on her part (180). Although this technique makes it difficult to tell who is who at the beginning of the narrative, it allows the reader to not quite become fully immersed in the story.

The Poetry: Although the majority of the poems in the collection are told in free verse, with a mirrored version of the poem spoken by the opposite character, Laskin also employs a variety of other poetic forms throughout Ronit and Jamil including a series of ghazals (a Middle-Eastern lyric poem with a fixed number of verses and repeated rhyme, typically on the theme of love and often set to music) and a crown of sonnets (a series of multiple 14-line poems, where each new sonnet begins with the last line of the previous sonnet). Laskin utilizes lyricism, rhyme, repetition, and imagery in order to convey the sense of longing shared by Ronit and Jamil. For example in the ghazals that appear together in one spread, "Built of Bones: Jamil's Ghazal" and "Water: Ronit's Ghazal," the speakers of the poems meditate on embodiment and their connection:


There is nothing but the body


when I find myself beside you


from the dead and my desire

In Ronit's counterpoint, she laments, "my body withers in brutal summer / so what I need is water" and "if your body's mine / I'll need no water" (125). Additionally, multiple poems reference lines from Romeo and Juliet, as well as work by other poet such as Mahmoud Darwish. 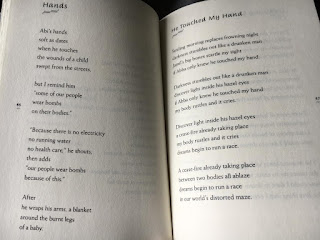 The Page: Ronit and Jamil is divided into five acts: "Naming Things," "Complications" (which includes the series of ghazals), "Dreaming an Escape: Overlapping Voices," "A Father's Lament" (which is made up of a crown of sonnets), and "Onward." The verse novel is also bookended by an introduction, reader's note, and epigraph, as well as an afterword and acknowledgement section. I found Ronit and Jamil to be an interesting and lively read. I give it four stars.
Posted by Krystal Howard at Friday, April 21, 2017