Christine Heppermann's _Poisoned Apples: Poems for You, My Pretty_ 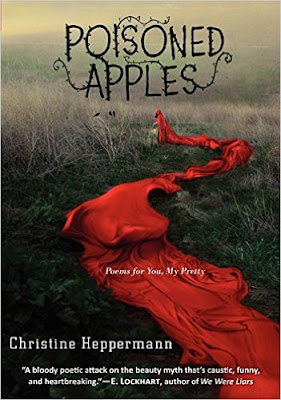 The Plot: Christine Heppermann's Poisoned Apples: Poems for You, My Pretty (2014) is a collection of fifty poems that uses fairy tales to confront the realities of contemporary girlhood. I am not sure that I would categorize Heppermann's Poisoned Apples as a verse novel; it more clearly resembles a traditional collection of poems with strong narrative impulses (it reminds me a lot of Francesca Lia Block's 2011 collection, Fairy Tales in Electri-City). While there is no primary character within the collection, the speaker of the poems is almost always concerned with the bodily experiences of the teenage girl. As Heppermann explains in her author's note: "fairy tales and reality... run together, even though the intersections aren't always obvious. The girl sitting quietly in class or waiting for the buss or roaming the mall doesn't want anyone to know, or doesn't know how to tell anyone, that she is locked in a tower" (109). The poems in Poisoned Apples tell the story of the social and cultural regulation placed upon the female body through the lens of fairy tales and the voice of a present-day young adult heroine.

The Poetry: The poems in Poisoned Apples make use of lyricism, metaphor, and imagery. Formally, Heppermann primarily employs free verse, but also includes haiku and villanelle. Many of the poems are quite arresting. For example, the poem "Spotless" features a five-stanza poem juxtaposed with a black-and-white photograph of a woman in white buried to the waist in a mountain of snakes, her face averted from the viewer. The speaker of the poem in "Spotless" begins,

So I whet one razor

after another against the stony

flesh of my leg until in barely

any time at all I have seven sharp 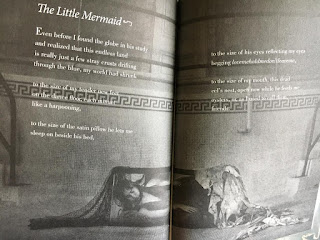 The poem then uses anaphora and imagery in its description of the body: "as deep as the silence of my days, / as straight as the path I ran from / the huntsmen, / as red as those three drops" (95).

The Page: The poems in the collection are accompanied by black-and-white photographs by various artists. The photography adds considerably to the collection in that it contributes yet another example of the way in which fairy tales can be updated to reflect contemporary realities.

I thoroughly enjoyed Heppermann's collection, and I give it four stars.
Posted by Krystal Howard at Friday, April 07, 2017