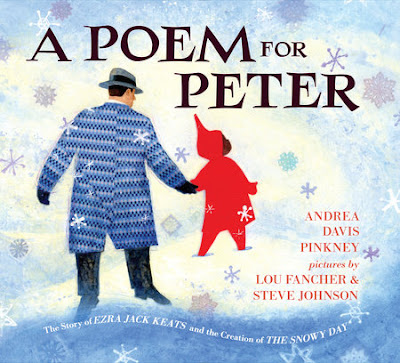 The Plot: This week's picture book verse narrative is A Poem for Peter: The Story of Ezra Jack Keats and the Creation of The Snowy Day (2016) written by Andrea Davis Pinkney and illustrated by Lou Fancher and Steve Johnson. A Poem for Peter is a 40-page narrative poem. The narrative tells the story of Keats's family and birth, his early life and career, and the experiences that led him to create his most well-known work for young readers in 1962, The Snowy Day. Pinkney begins with Keats's parents, Polish immigrants who fled Warsaw in 1916 and settled in Brooklyn (9-10). From the age of eight, Keats knew he wanted to be an artist, and although his parents worried about his dream, they supported him in his education and art. Peter, the young protagonist of The Snowy Day, appears throughout the picture book in what Pinkney describes as "a 'peek-a-boo' fashion, waving at the reader, serving as a narrative thread that is stitched throughout" (49).

The Poetry: The long poem that makes up the pages of A Poem for Peter "employs a form known as 'collage verse,' 'bio-poem,' or 'tapestry narrative' in which factual components are layered with a mix of elements" (49). As Pinkney explains, "the use of a verse narrative to present Keats's life echoes Keats's use of collage to tell a story" (49). In addition to these formal attributes, Pinkney also employs anaphora, lyricism, rhythm, and rhyme to tell the story of Keats's life. For example, in the spread on pages 40-41, the reader sees Peter gazing out the window at the tops of buildings and a flock of birds. The last two stanzas on the page read:

forging your path in knee-deep wonder.

welcoming us into your play.

marching out in a whole new way.

The final stanza is bolded for emphasis (as many are throughout the picture book): "With you, Ezra tore off the blinders. / Yanked up the shades. / Revealed the brilliance / of a brown-bright day" (41).

The Page: As Pinkney emphasizes in the end pages (which include a section on "Ezra's Legacy," "Keats, the Collage Poet," acknowledgements, and sources consulted for the creation of the book), Keats's choice to include a young African American child as the main character in his picture book in the early 1960s was groundbreaking: "as an artist who had grown up surrounded by poverty and anti-Semitism, Ezra understood what it was like to be excluded" (46). Pinkney further notes the reasons behind her enthusiasm for this project in her bio: "as an African American child growing up in the 1960s, at a time when I didn't see others like me in children's books, I was profoundly affected by the expressiveness of Keats's illustrations." A Poem for Peter is a complex and striking verse narrative that would pair nicely with The Snowy Day. I give it five stars.
Posted by Krystal Howard at Wednesday, April 12, 2017