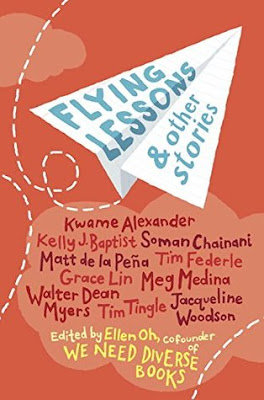 The Plot: Kwame Alexander's "Seventy-Six Dollars and Forty-Nine Cents: A Story-in-Verse" is the penultimate story the anthology Flying Lessons and Other Stories (2017) edited by the cofounder of We Need Diverse Books, Ellen Oh. Alexander pitched the work as a "novella-in-verse" or a "story-in-verse" on twitter the day before the book's release in early January. "Seventy-Six Dollars and Forty-Nine Cents: A Story-in-Verse" is a 48-page series of poems about 12-year-old Monk. The series begins with the poem "How to Write a Memoir" which details why Monk begins writing his poems (159). The next poem in the series, a haiku, is entitled "Question About the Assignment" and underscores the unique aspect of this story-in-verse: "I know memoir is / based in fact, but can it have / a little fiction?" (160). The story goes on to detail how after a car accident, Monk develops the ability to read people's minds, and ultimately he uses his powers on Angel Carter, his crush, to impress her enough to maybe get her to go on a date with him.

The Poetry: Alexander's story-in-verse is told primarily in free verse, with the exception of one haiku, and another poem which includes a haiku stanza. In addition to these formal aspects, Alexander also employs rhyme and anaphora sporadically throughout the series, as well as imagery and space on the page. Overall, "Seventy-Six Dollars and Forty-Nine Cents: A Story-in-Verse" is more focused on story than it is on poetic device, which makes sense for a shorter work. One aspect of Alexander's series that is particularly effective is his use of parenthetical aside in several of his poems. For example, in "How to Write a Memoir," Alexander uses five of these asides to develop the voice of his protagonist:

if we liked it

The use of the short line and the parenthetical aside ask the reader to move more quickly and rhythmically through the poem and mirror Alexander's signature technique in his previous verse novels that focus on rhythm, linguistic play, and voice. 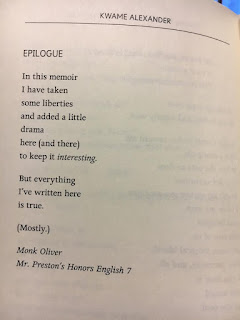 The Page: Like longer verse novels, Alexander's novella- or story-in-verse makes use of the space on the page, and among the nine other works in Flying Lessons and Other Stories, "Seventy-Six Dollars and Forty-Nine Cents: A Story-in-Verse" takes up the most space in the collection. Alexander's use of this shorter form of the verse narrative is new and groundbreaking; perhaps many other verse novelists will turn to this shorter form as poetry and verse narratives become more popular in contemporary children's and YA literature.

You can listen to a soundcloud recording of Alexander reading his story HERE. I highly recommend "Seventy-Six Dollars and Forty-Nine Cents: A Story-in-Verse" and the other nine stories in the collection. I give it five stars.
Posted by Krystal Howard at Friday, January 20, 2017