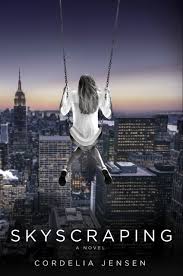 The Plot: Cordelia Jensen explains in the acknowledgements of her 2015 Skyscraping that "a long, long time ago it was a memoir.... Although the book was once a true story, it is now, absolutely, a work of fiction" (346). Set in 1993 New York City, Jensen's verse novel tells the story of Mira, who is just starting her senior year of high school. She is excited about editing her high school yearbook, taking an Astronomy class, and applying to colleges, but her world is turned upside down when she walks in on her dad and his lover after school one day. Mira has long seen her father as a mentor and someone who she wants to emulate. He is a Spanish Literature professor at Columbia and stepped up to take care of her and her sister while Mira's mother went to Italy for a year to study art. After this incident, Mira's mother and father explain to her and April, her younger sister, that they have an open marriage, that Mira's father is gay, and that he is HIV positive. While April is supportive, Mira is not; she is angry that her father and mother have lied to her. Mira copes with her feelings through self-harm, drinking, smoking weed, and exploring her sexuality. While I am a huge fan of the problem novel, and Skyscraping definitely falls into this category, I took issue with much of the plot structure and the unredeeming representation of the seventeen-year-old protagonist. Mira is portrayed as judgmental, overdramatic, and even homophobic at times throughout the narrative. It is not until almost 200 pages into the verse novel, when she realizes her dad's HIV has progressed to AIDS and that he only has about one month to live, that she begins to let go of her anger and, frankly, stops throwing a temper tantrum. The only time Mira comes close to accepting her father is after she loses her virginity to her ex-boyfriend, tells him her family's secret, and he remarks that "AIDS is a deserved disease" (208). While most problem novels are issue focused and present their characters as somewhat self-centered, they also provide the reader a sense of comfort (in that they feel that they are not alone) as well as a window through which they might see themselves or learn something new about a serious topic. Skyscraping falls short for me in this respect; the protagonist is portrayed as hateful and without depth, and the way in which the significant issues are treated in the novel is problematic.

The Poetry: Jensen divides her verse novel into four seasons, following Mira through "fall," "winter," "spring," and "summer" of her final year in high school. The poems utilize free verse, and the author occasionally makes use of shaped or concrete poetry. The poems are mostly told in fragmented, end-stopped phrases which gives the verse novel a jarring quality, and at times makes it difficult to read. This is clear from the first poem in the narrative "Piloting":


I have everything I need.


The security man knows my name,


Soon the school with be full; 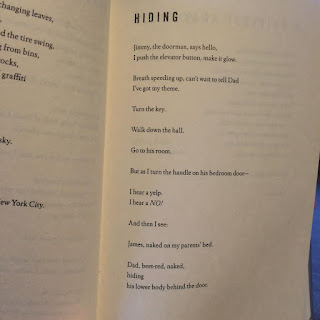 Just like these first few lines of the verse novel, the poetry throughout the collection falls flat. The author seems to rely very little on sound and music, and the images presented are mostly mundane. Jensen attempts to use the yearbook theme Mira chooses (outer space) as a metaphor for Mira's experiences and feelings of isolation, but again this metaphor becomes a missed opportunity for the author to inject lyricism and vivid imagery into her poetry.

The Page: Like many other verse novels, especially those that focus less on the music, imagery, and/or sound and more on narrative, Jensen's work attempts to make use of space (literal page space, as well as the metaphor of outer space). These attempts ultimately miss the mark for me as a reader.

I give Jensen's Skyscraping two stars.
Posted by Krystal Howard at Friday, February 05, 2016